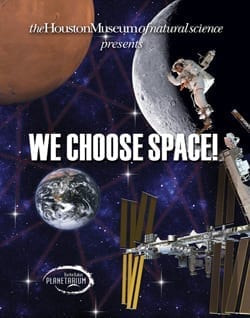 Fifty years ago, President Kennedy chose the Moon. Today we can still choose a trip into space to the completed International Space Station or to the Moon. Prepare for an immersive full-dome adventure on the ISS or in a future moon colony. The show makes human spaceflight after the Space Shuttle very exciting, immersive, and real.

Enjoy the astronaut experience and share it with children who dream of spaceflight! This is the first planetarium show told completely by astronauts (Scott Parazynski, Tom Jones and Gene Cernan) and a famous space reporter (Walter Cronkite).

It is the first show to use real fisheye photography from inside the International Space Station and to construct and tour the completed Station – which is larger than a 5-bedroom house! And, it’s the first show to animate the construction of a sustainable lunar colony and to feature potential commercial spacecraft of the present and future. We Choose Space! is an engaging experience for families and space enthusiasts.

Last summer’s flight of Atlantis, the last Space Shuttle, began a new chapter in space exploration. Human spaceflight in this century depends on young people, private companies, and governments around the world choosing space travel for themselves, their children, and their countries. In the spirit of President Kennedy, this show once again chooses space, not because it is easy, but because it is hard—and because meeting its challenges is our destiny.