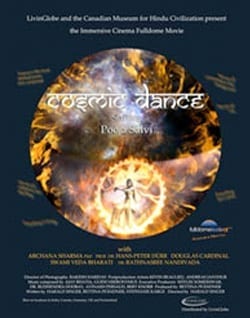 Cosmic Dance is an Immersive Cinema feature film with documentary content combined with fictional scenes and Bollywood-like dancing. It shows the parallels between Hinduism and modern science.

Impressive images shot in India, Canada and Europe take the audience into a cosmic dance of creation and dissolution. Leela (Pooja Salvi), a young Indian woman who is a student of physics in Toronto, discovers astonishing analogies between modern quantum- and astro-physics on one side and Hindu knowledge and ancient Indian Vedic cosmology on the other side. Thousands of years ago the Indians had a surprisingly precise knowledge about the genesis of the universe, which concurs with the theory of the Big Bang.

On a trip through India Leela finds out in a dialogue with international scientists and teachers that the entire nature and all life are connected. Matter und spirit are not separated, love connects the entire universe, divine energy reigns in each one of us. Hinduism, modern science and universal thinking are no contradiction but one reality.