Secret of the Cardboard Rocket 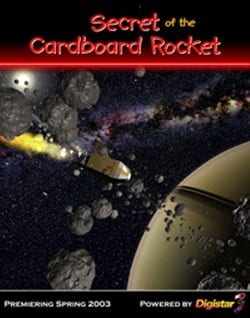 One of the most popular children’s show has been remade for the full dome environment.Embark on an outstanding adventure as two children spend a night touring the solar system alongside their ship’s navigator, an astronomy book. Produced with modern 3-D digital animation and a 5.1 soundtrack with spectacular effects created at George Lucas’ Skywalker Ranch.

The narration track has been edited to take into account the reclassification of Pluto. However, the voices were not re-narrated so we made just a few key changes to the actual recorded soundtrack. We removed all references to Pluto as the “ninth planet” or “smallest planet” or “last planet” but we still call it a “planet.” Our approach is that even though Pluto is now a “dwarf planet” it’s still a planet. We recommend doing the program by having your presenter make a few comments during the introductions to ask questions and explain what’s going on with Pluto and why the show still refers to it as a planet. Then follow up with some Q&A at the end. This approach has been working extremely well for us, and helps to clarify the issue.

Legends of the Night Sky: Orion

The Little Star That Could
Scroll to top