Legends of the Night Sky: Orion 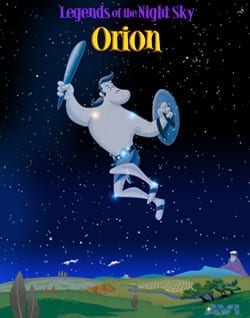 Orion takes a lighthearted and imaginative look at the myths and stories associated with the constellation Orion, the great hunter of the winter sky.

Best known for its award-winning educational and entertainment laser shows, AVI’s first foray in fulldome video production is both an artistic and technical achievement. “The show brings the mythological Orion to life in a fun-filled, animated adventure that is unlike any planetarium program ever created,” said Joanne Young, AVI’s Managing Director and the show’s Executive Producer.

Accompanied by narrators Aesop the owl and Socrates the mouse, we follow Orion’s adventures as he grows to manhood, battles mythical beasts, foils the plot of an evil king and wins the heart of Artemis, the beautiful moon-goddess. By the end of the story, we learn how the constellation Orion was placed in the sky, forever turning overhead throughout the seasons.

Legends of the Night Sky: Orion is available in high-definition “dome master” format with 5.1 surround soundtrack and is compatible with all Full Dome video projection systems.

Secret of the Cardboard Rocket
Scroll to top